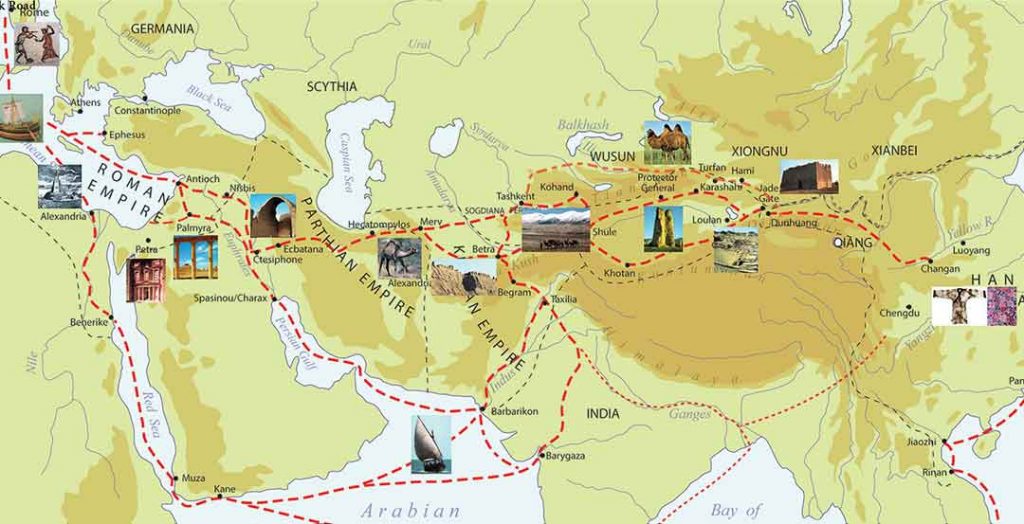 The Venetian explorer, trying to explore aand trade, passed through mountains, seas and deserts and set out on a path to connect the West to the East. A route crossing water and land, mountains and valleys, passing through dozens of territories, connecting Western Europe to the easter lands of Asia. One of the landmarks to cross was Iran… A country with over 2,000 years of rich history, civilization and culture, which Marco Polo didn’t miss the chance to explore it.

The world’s oldest communication network that has been the bridge between more than 20 territories on three continents. It has seen many people passing through (e.g. Marco Polo) with different stories to tell. Many traders have passed through these paths for centuries, each with its own narrative.

According to Marco Polo book, the last city he visited was Tabriz. Marco Polo called Tabriz (Touriz) as the district of large forts. One of the oldest, largest cities of Iran, and the capital of Eastern Azerbaijan Province. A city with a rich history from 200 B.C which had been the capital of Iran for periods of time. Most of Tabriz historical sites belong to Ilkhanid, Safavid and Qajar dynasty. Among these sites is the grand Bazaar of Tabriz, which is designated a World Heritage Site as The most longest covered Bazaar in whole world.

From the early modern era, Tabriz was pivotal in the development, movement and economy of its three neighboring regions; namely the Caucasus, Eastern Anatolia and Central Iran. In modern era city played a vital role in the history of Iran.

The capital of Fars Province. A city renowned for its beautiful gardens and springtime paradise on earth. Where people travel not only for travel but also for the betterment of their hearts. In spring Shiraz has a strange atmosphere compared to other cities in Iran. In the spring, with every breath and exhale, the fragrance of orange will infiltrate your whole being.

Wandering around the old avenues of Shiraz, visiting Nasirol Molk Mosque with its magical colored windows and tilt art. And the historical Vakil Complex with its unique Bath, Bazaar and Mosque. walking through the gardens such as the Eram and Qavam gardens that their beauty is breathtaking, will introduce you to the lifestyle  of the Shiraz people that has continued through the ages.

Visiting The Persepolis and Pasargad historic site that will tell you about the rich history of Whole Iran. Listening to some poetries of famous poets Hafiz and Sa’di at their tomb with a cup of Faloodeh will complete your trip in the best way.

The religious capital of Iran and the most important religious tourism hub in the north-east of Iran as the center of Khorasan Razavi province. A city dating back to 5000 years. A city that at the same time speaks of both civilization and history, as well as its religion and nature, all three make Mashhad a unique destination for any type of tourist to visit.

Almost everything about Mashhad relates to its role as the holiest city in Iran. As the capital of Iran’s Khorasan province, Mashhad’s year-round cool temperatures and fascinating insights into the Shi’ite heartland have much to offer visitors.

Mashhad started life out as Sanabad. A village pitstop for trade caravans headed towards Turkmenistan. But in the 9th century, the eighth Shi’ite Imam, Ali Bin Moosa Al Reza, the great-grandson of Imam Ali, cousin & son in law of Prophet Mohammad was poisoned and buried in Mashhad.

His shrine became one of the holiest sites to the Shi’ite Muslims after the Holy Kaaba in Saudi Arabia and Karbala in Iraq. Over the next thousand years, the shrine complex was levelled, ransacked and rebuilt a number of times depending on the ruling army of the day. Today the shrine is the most important place in the city and in the whole of Iran.

Mashhad is also known for gemstones and it was included in WIPO since 2016. The area with 39 known different varieties of gemstone is rich enough to export gemstones to many other countries. More than 16000 registered artisans are busy in the field. Agate (Aghigh) is the most popular gemstone, following by turquoise (Firouzeh). Different types of Corundum such as Sapphire or Ruby, Jasper, aquamarine are some other exploited gemstone products of Mashhad city.

In a flat plain covered with a fence of mountains, somewhere in the heart of the desert, where the Desert Plains and Lut Plains give their light and warmth to the earth, a city is located. A city in which the aqueducts have taken the water that is the essence of life from the ground The winged windbreakers dominated the wind and with the atmosphere on its alleyways, continues the life of this civilization with centuries of history.

This city is Yazd. One of the oldest cities in Iran that its history goes back to the ancient Iran. Marco Polo mentions Yazd in his book “as big as seven days walk”.

Where you figure out that history is within the people’s lifestyle. Visiting ancient places such as Dakhme, Silence Towers and Zoroastrian Fire Temple will take you deep in History. Walking through the old avenues of Fahadan and visiting the Tallest Windbreaker of the world in Dawlat Abad Garden that is one of the world heritage sites will spell you and take you deep into Shahrzad fairytales.

Complex headings in Yazdi cashmere; Classes filled with foods and desserts such as Baklava and Qutab served as a feast in the heart of the desert. A feast under the starry desert sky takes you deep into the stories of a thousand and one nights and completes your journey from Yazd.

Esfahan is Iran’s top tourist destination for good reason. Its profusion of tree-lined boulevards, Persian gardens and important Islamic buildings gives it a visual appeal unmatched by any other Iranian city. Many artisans working here underpin its reputation as a living museum of traditional culture. The historic bazaar, the picturesque bridges and Unesco-listed central square are sure to be highlights of a holiday.

Naqsh-e Jahan Square is the overwhelmingly impressive central attraction of Esfahan, which features a number of architectural wonders.

At the southern edge of the square, which stretches over half a kilometre in length, is the Imam Mosque (or Shah Mosque). Completed in 1629, the UNESCO world heritage site is arguably the premier example of Iran’s Islamic architecture.

Marco Polo ‘s magical trip in Persia, you should try it.